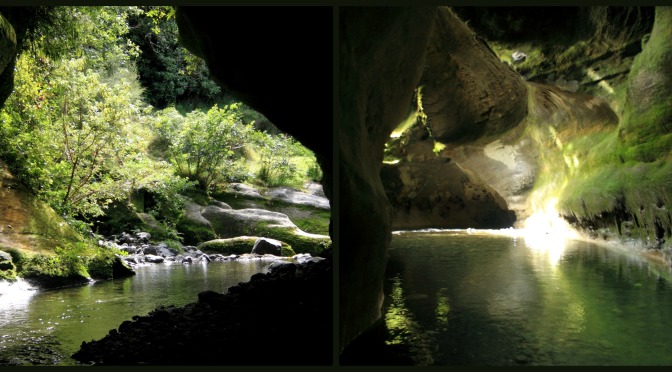 I was on the net looking for places Gina & I could visit down and around, the Wairarapa Region and I came across Patuna Farm Adventures in Martinborough.

Gina and I particularly liked the sound of the chasm walk so decided we would go. I rang the Farm and told them we would like to come down and do the chasm walk.

As it was in April I thought I had better check to see if it was still open.  As they close the chasm from April to October due to the rising water levels.

We set off  just after 8am in the morning , It took us a couple of hours to get there from Woodville, the directions are pretty straightforward and can be found on their site along with other information. Just click on the link above.

There is a $15 charge for adults & $10 for children,  be prepared to get wet, so take along a change of clothes and something to eat and drink.

When we arrived we were greeted by the owner, we then followed him in the car to the starting point of the chasm walk.  We parked the car and were given directions he also asked us to let him know when we had finished the walk.  As there is no mob coverage out there.

Then we set off, we walked through a pine forest, through the river and up and over a  bank and across farmland and down through some bush and into the river again and chasm. It was a lovely day and we had great views of the surrounding countryside. We stopped and had lunch before we entered the chasm.

The limestone chasm is amazing, it makes you feel very small as you walk through it.  You do however have to watch where you walk as some of the smaller stones can be slippery  and in some places the water is deeper than in other parts. Good footwear is a must.  Gina and I spent a couple of hours walking and looking through the chasm, after which we walked back out the same way we came in. Another hidden gem that a lot of people don’t know about.

We stopped off at the farm, on our way out, then headed for home.