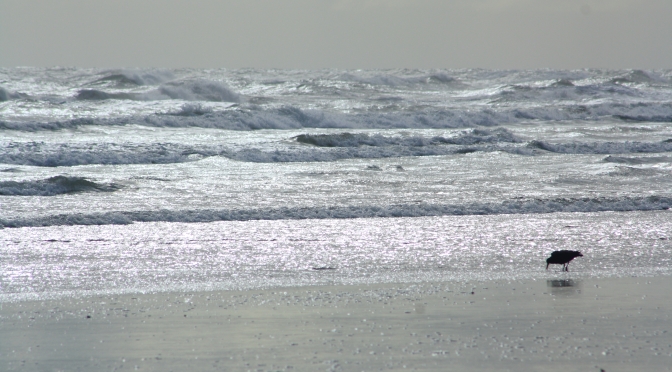 Gina and I enjoy going to the beach anytime of year, you see things in winter that you don’t see in summer and vice versa.  We visited Hokio Beach in July 2014, it was fine but quite cold and windy. Good day for thermals and a woolly hat.

Hokio Beach is situated just outside of the Levin township. Upon arriving there, I saw two shags perched in a tree, I quickly grabbed my cameras and headed off, leaving Gina to sort the car and grab her gear.

After I photographed the shags we made our way down to the beach, the sand was being blown around by the wind and it created a haze effect. The wind eventually died down a bit, as we walked along the beach.

At one stage there was hardly any clouds covering the sun and just for a short time, the winter sunlight turned the ocean a silver colour.

While the wind made interesting patterns around the shells lying on the beach, some of the shells looked like they were sitting on little stalks made of sand.

Gina and I saw quite a few different bird species, while we were there on the beach and around the waterways, Shags, Ducks, Pukeko, Gulls, Oystercatchers and Swallows were there in good numbers.

After we spent a couple or so hours walking along Hokio Beach, we decided to head for home.  On the way back into Levin we stopped to look at the snow-covered ranges in the distance and of course to take photos.

All in all another good day out.

Gina & I decided to head down to Levin and visit the home of the Hydrabad Shipwreck at Waitarere Beach, in the winter of 2014.

It was fine but cold and windy, scarf and woolly hat weather.  It took us about an hour to get to Levin, we stopped and had a wander around the shops and then we came across the Adventure Park in Oxford Street.  It is a well laid out and maintained park, with many facilities, it even has a dog exercise area. It is also Wheelchair friendly. Its a great place to stop and take a break.

Both, Gina and I were dying for a coffee and low and behold, there was Woodley’s Coffee Break, parked in the car park.  I must say Woodley’s make great coffee, they also sell a variety of snacks and drinks. They can be found at the park most days.

After we had a chat and finished our coffee, Gina & I  headed off to Waitarere Beach.  It was  breezy and cool and the sand was being blown around by the wind. We walked up the beach until we saw the Hydrabad  marker, there wasn’t much left to see, as nearly all the wreck was covered by sand. Although, there was a small portion of iron still visible, I can imagine there would be nothing left to see today.

The Hydrabad was driven ashore at Waitarere beach on June 25th 1878.  Gina & I are both glad we made the trip, to see the last remains of this historic ship.  We wandered around the beach for a while, then headed home.