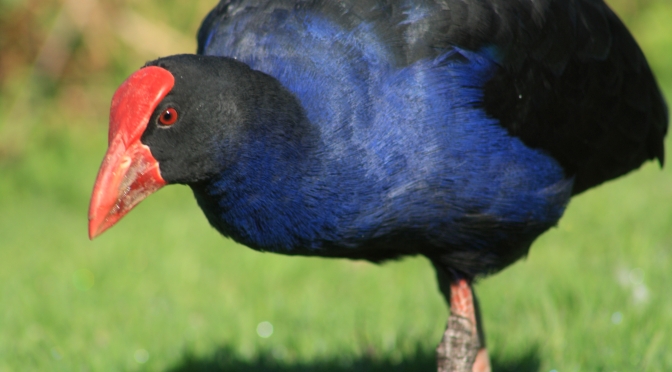 I must admit Gina and I had never heard of Nga Manu Nature Reserve in Waikanae, until I saw an article in a blog I was reading. The blog pointed me to their Facebook page, so as, we are always on the lookout for new places to visit, I thought I would take a look, I liked what I read, so say, no more.

Gina and I set off to go and visit Nga Manu today, we left Woodville just after 8am we arrived at the reserve a little after 10.30am, as we had booked to go on a bird feeding tour at 11am.

I must admit upon reaching Waikanae, we didn’t get lost once, Nga Manu, is clearly signposted, all the way to the reserve.  We would have been there earlier but we had to stop for our coffee fix and something to eat, as neither of us had, had any breakfast.

As we got out of the car in the car park, we were greeted by two Kereru (NZ wood pigeons)  perched up in the tree, above us.  As we walked towards the main reception building, we could hear different birds calling, making their presence known.

We were greeted at reception by Joanne, who gave us a map which included information on the attractions at Nga Manu. As it happened, Joanne was also our guide, on the bird feeding tour.

While we were waiting for the tour to begin, Gina and I waited outside by the pond. We were greeted by friendly ducks and Pukeko. I must say its the closest I have ever been to one.  Then to top it off, I turned around and there were Black Swans in close proximity as well. Which was a real bonus for me, as I often spend time lurking in and around waterways and bushes, trying to get photos of them.

At 11am we set off with Joanne on the bird feeding tour around the aviaries, which Gina and I thoroughly enjoyed, it was very informative and we got to feed the birds. Thanks Joanne. The tour is a must do, if you have the time. We saw Kakariki (NZ Parakeet) Kaka, Kea, Scaup (diving ducks) Kiwi, plus many more.  We also saw the Tuatara (rare NZ reptile).  The only thing, that put a dampener on the tour was my camera’s sd cards failing, so I have no photos of the aviary tour. Good excuse for us to go back again:-) not that we need one.

After the tour was over, we walked around some more of the reserve. We saw many more species of birds including Tui , White faced heron and Monarch butterflies on swan plants. We then made our way up to the lookout tower, the views were amazing. We also visited, Fern Island, Preservation Island and BBQ Island the only things we didn’t get to finish were the bush walk and to feed the eels.

There are plenty of places to sit down and take a load off or have a picnic. The grounds are well maintained, both the pathways and broadwalks  make for easy walking, especially if you have a wheelchair or baby buggy. I must say it is one of the best places we have been to, so far, that enables easy access for anyone in or with, a wheelchair or buggy.

As usual but all to soon, it was time to head for home.  If you are looking for great place to visit, Gina and I highly recommend Ngu Manu Nature Reserve, in Waikanae.